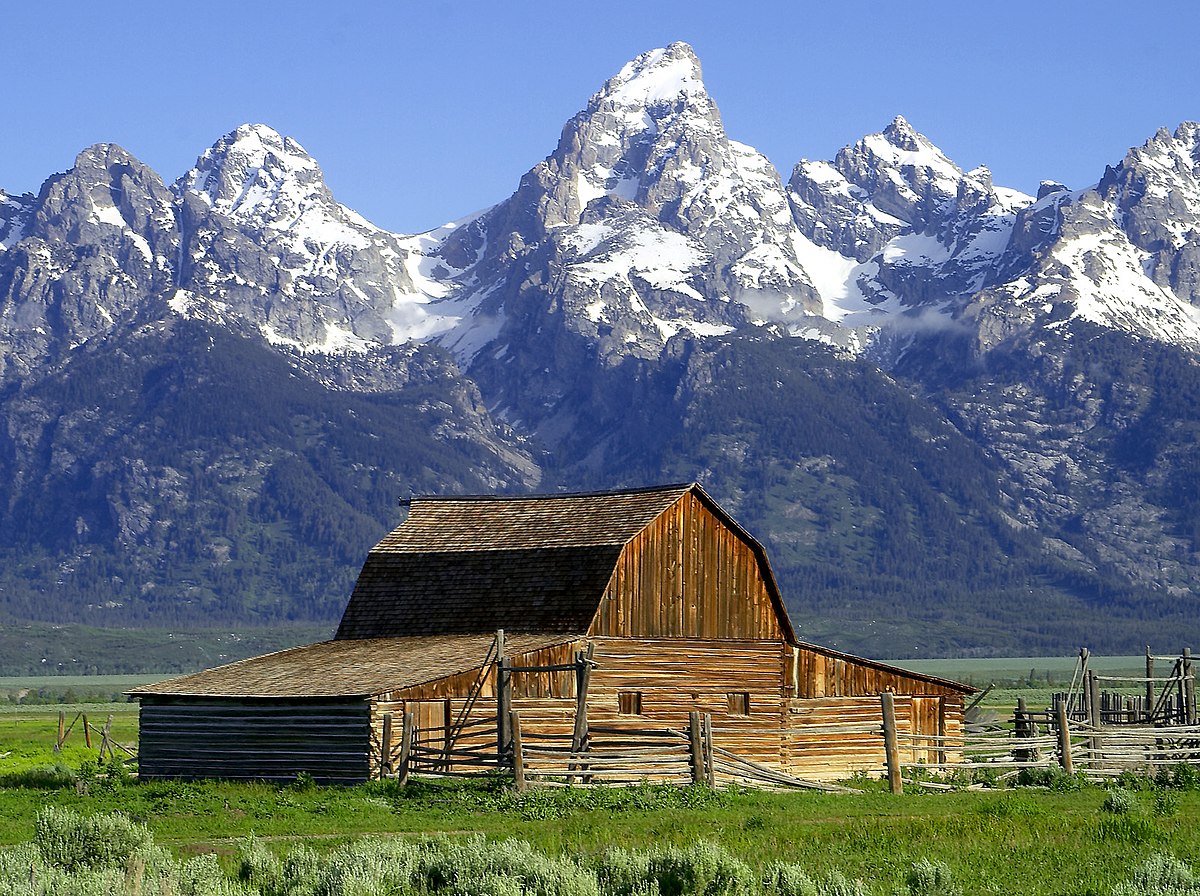 Rising above a scene rich with extraordinary wildlife, pristine lakes, and alpine terrain, the Teton Range stands as a monument to the people who fought to protect it. These are mountains of the imagination. Mountains that led to the creation of Grand Teton National Park where you can explore over two hundred miles of trails, float the Snake River, and enjoy the serenity of this remarkable place.

Grand Teton National Park is an American national park in northwestern Wyoming. At approximately 310,000 acres (1,300 km2), the park includes the major peaks of the 40-mile-long (64 km) Teton Range as well as most of the northern sections of the valley known as Jackson Hole. Grand Teton National Park is only 10 miles (16 km) south of Yellowstone National Park, to which it is connected by the National Park Service–managed John D. Rockefeller Jr. Memorial Parkway. Along with surrounding national forests, these three protected areas constitute the almost 18-million-acre (73,000-square-kilometer) Greater Yellowstone Ecosystem, one of the world's largest intact mid-latitude temperate ecosystems.
The human history of the Grand Teton region dates back at least 11,000 years, when the first nomadic hunter-gatherer Paleo-Indians began migrating into the region during warmer months pursuing food and supplies. In the early 19th century, the first white explorers encountered the eastern Shoshone natives. Between 1810 and 1840, the region attracted fur trading companies that vied for control of the lucrative beaver pelt trade. U.S. Government expeditions to the region commenced in the mid-19th century as an offshoot of exploration in Yellowstone, with the first permanent white settlers in Jackson Hole arriving in the 1880s.
Efforts to preserve the region as a national park began in the late 19th century, and in 1929 Grand Teton National Park was established, protecting the Teton Range's major peaks. The valley of Jackson Hole remained in private ownership until the 1930s, when conservationists led by John D. Rockefeller Jr. began purchasing land in Jackson Hole to be added to the existing national park. Against public opinion and with repeated Congressional efforts to repeal the measures, much of Jackson Hole was set aside for protection as Jackson Hole National Monument in 1943. The monument was abolished in 1950 and most of the monument land was added to Grand Teton National Park.
Grand Teton National Park is named for Grand Teton, the tallest mountain in the Teton Range. The naming of the mountains is attributed to early 19th-century French-speaking trappers—les trois tétons (the three teats) was later anglicized and shortened to Tetons. At 13,775 feet (4,199 m), Grand Teton abruptly rises more than 7,000 feet (2,100 m) above Jackson Hole, almost 850 feet (260 m) higher than Mount Owen, the second-highest summit in the range. The park has numerous lakes, including 15-mile-long (24 km) Jackson Lake as well as streams of varying length and the upper main stem of the Snake River. Though in a state of recession, a dozen small glaciers persist at the higher elevations near the highest peaks in the range. Some of the rocks in the park are the oldest found in any American national park and have been dated at nearly 2.7 billion years.
Grand Teton National Park is an almost pristine ecosystem and the same species of flora and fauna that have existed since prehistoric times can still be found there. More than 1,000 species of vascular plants, dozens of species of mammals, 300 species of birds, more than a dozen fish species and a few species of reptiles and amphibians inhabit the park. Due to various changes in the ecosystem, some of them human-induced, efforts have been made to provide enhanced protection to some species of native fish and the increasingly threatened whitebark pine.
Grand Teton National Park is a popular destination for mountaineering, hiking, fishing and other forms of recreation. There are more than 1,000 drive-in campsites and over 200 miles (320 km) of hiking trails that provide access to backcountry camping areas. Noted for world-renowned trout fishing, the park is one of the few places to catch Snake River fine-spotted cutthroat trout. Grand Teton has several National Park Service–run visitor centers, and privately operated concessions for motels, lodges, gas stations and marinas.

We can help! Many campsite reservations are cancelled daily. Just tell us when you’d like to camp at Grand Teton National Park, and how long you want to camp for. We’ll text you when a suitable spot opens up!