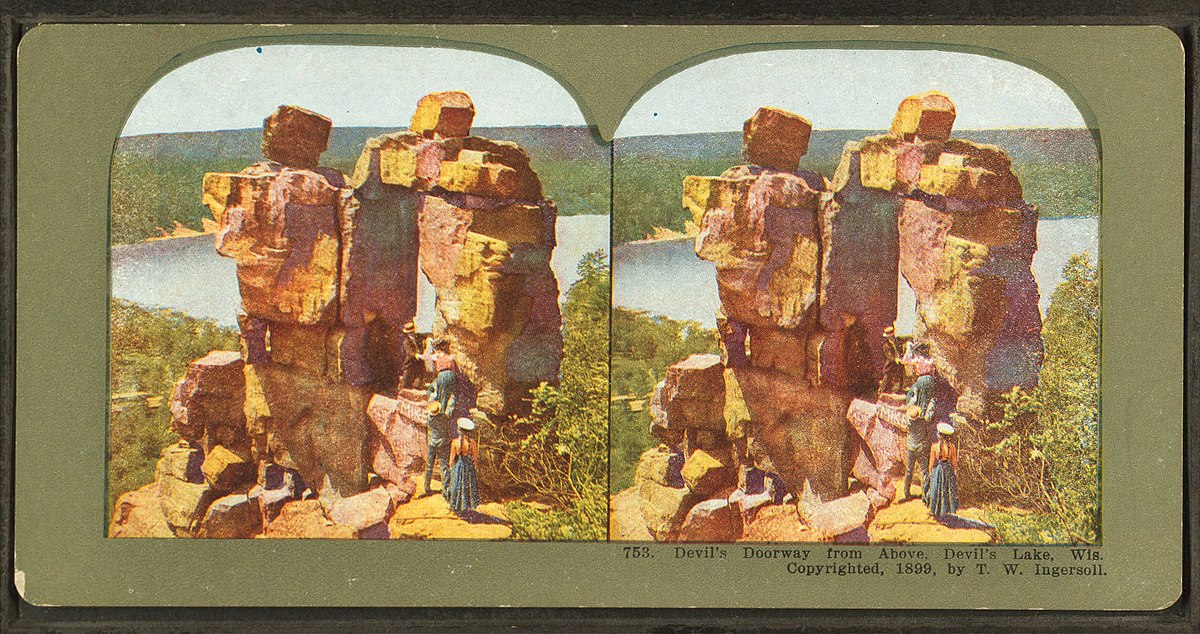 Devil's Lake State Park is a state park located in the Baraboo Range in eastern Sauk County, just south of Baraboo, Wisconsin. It is around thirty-five miles northwest of Madison, and is on the western edge of the last ice-sheet deposited during the Wisconsin glaciation. The state park encompasses 9,217 acres (3,730 ha), making it the largest in Wisconsin. The state park is known for its 500-foot-high (150 m) quartzite bluffs along the 360-acre (150 ha) Devil's Lake, which was created by a glacier depositing terminal moraines that plugged the north and south ends of the gap in the bluffs during the last ice age approximately 12,000 years ago. The sand at the bottom of Devil's Lake is thought to be deposited by glaciers.
There are many quartzite rock formations, such as Balanced Rock and Devil's Doorway, throughout the park. Effigy mounds are also located throughout the park. The park contains approximately eleven miles of the 1,200-mile (1,900 km) Ice Age Trail. Its scenic beauty, along with its proximity to the Wisconsin Dells, has made it one of the most popular of Wisconsin's state parks for both day use and overnight camping; the park receives over three million visitors annually. During the fall, the park's brilliant foliage makes it a popular attraction. Parfrey's Glen, Wisconsin's first state natural area, is managed by the Devil's Lake State Park and located just east of the park.

We can help! Many campsite reservations are cancelled daily. Just tell us when you’d like to camp at Devil's Lake State Park, and how long you want to camp for. We’ll text you when a suitable spot opens up!